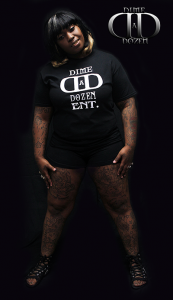 Where most female artists in the rap game often boast more impressive looks than MC skills, La’ Chat represented a new style of female rapper — the female thug rapper. Following the precedent set by fellow female thug rappers from the South — Mia X and Gangsta Boo — Chat broke through as a member of an established clique (Three 6 Mafia) and represented a feminine point of view. Yet Chat didn’t rap about Prada like Foxy Brown, never resorted to overt sleaze like Lil Kim, and wouldn’t even bother with crossover tactics like Eve. No, Chat represented the ghetto with pride. She raps about street politics, drug dealing, casual sex, and staying true to the thug life.

Her breakthrough came on Project Pat’s “Chickenhead,” one of the first Three 6 Mafia-produced songs to get national airplay. She then reprised her role as the feminine foil on Three 6 Mafia’s “Baby Mama” from the Baby Boy soundtrack. These two impressive performances set the stage for her debut album, Murder She Spoke, which appeared in late 2001.

Since then, she has released several independent projects such as “Ultimate Revenge” in July 2004 selling over 8,000 units independently and “Dramatized” November 2004 selling over 10,000 units.( Both albums without any major promotion.) She later released her third Solo album “Bad Influence” in November 2006 which is still selling to this day. In between these albums she has been satisfying her fans with features and mix tapes with many major artists such as Shawnna of DTP, Juvenile, Murphy Lee, Yo Gotti, Gucci Mane and Mike Jones,Waka Flocka,8ball to name a few. She has recently started her own record label “Dime-A-Dozen” releasing her fourth independent album “Da Hood Home Girl” in July of 2008. She recently released a Trap-a-holics “Krumbz 2 Brickz”, May 2010, with other up-coming projects to be released with such success she has received numerous awards for her achievements.

Through LaChat’s struggles and hustles in the game, she still manages to eat off of her well-deserved fame. She still gets booked for shows all around the United States and draws in record crowds. As you see, she is a very hard worker and will never give up at what she loves.